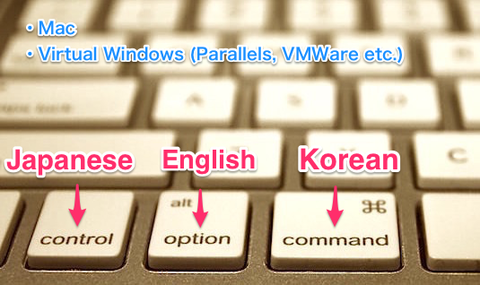 
(※2016.3.8 update!)
(POCHI ver.7.9  --  45 shortcut keys for 7 Input Sources and a toggle keys, Special Application Shortcuts)
I'm sorry that this program is getting day by day but this article is old.
If you have any question or request about POCHi, you can ask me in comment, or Facebook, or Twitter. I will be glad to reply you.

Hi. I updated the good tip for Mac user who have to use multi languages, 'Pochi' ver. 7.9.
Now you can use input language shortcut in virtual PC as well as on Mac.

(Old article : http://seoul-life.blog.jp/archives/30821467.html )
I use English, Japanese, and Korean input source on Macbook Air. ^^
So I have to switch these three languages so often to write articles in Japanese, and Korean, and also English.
The language short cut on Mac OS is no longer exist now, so I searched the sipmle shortcut free application on internet.
I found and tried some free application, but they never worked well and only bothered me.
Then I reallized that when I use more than 3 languages, these shortcut apps dosen't work well on Mac OS. Karabiner is one of them.
But I couln't bear to use annoying switching by [command+space]. I often push too much times, and then I have to push two more times again to switch to the language I want.
Then, the savior came out and saved me on the community about  Karabiner(former KeyRemap4MacBook), an application for remapping keys on Mac OS.
I heard about the ideas of the code for switching input sources there,  and I tried to arrange the code to switch languages...
Then, it works! OMG!  Wonderful!

I made 27 45 types of shortcut key for switching 7 input sources at only one push, or double keys push.
I will introduce the way to set this system, named "Pochi".
And I was wondering if I can use the same setting in virtual PC like Parallels Desktop or VMWare Fusion, and I succesed to make the system on Karabiner, with the Windows IME short cut setting.

You don't need to push [command +space] or [shift+option] to change language in Mac and Virtual Windows PC any more.
You can change until 6 languages(input source) at one push shortcut key.
You can use English, French, German, Spanish, Portuguise, Russian, Japanese, Korean, Chinese, Thai, and every other languages, of course.
Well, let's try to set the shortcut keys!

Pochi (One Shot Input Source Shortcut)（Ver.7.9）​
(Sorry, this article is a little old. You can read more information in POCHI. )
1. Well, you have to install the free application, "Karabiner" first.
↓ You can download and install here.
https://pqrs.org/osx/karabiner/index.html.en
(※ If you have Karabiner or KeyRemap4MacBook, please check the notice #2 below.)
2. Then, launch the Karabiner app on Launchpad.
(I recommand you to set the app to the first pace of Launchpad.) 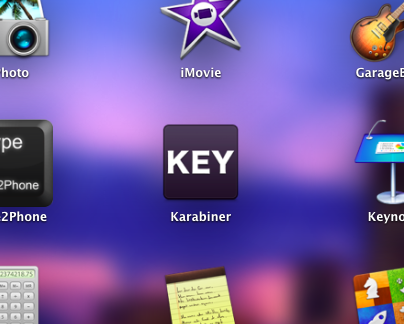 Karabiner is very useful and excellent program for customising Mac keybord settings.
At the first session, you have to open System Preferences and allow the apps in  "Security & Privacy".
https://pqrs.org/osx/karabiner/document.html.en

(You can read the way to use this app on
https://pqrs.org/osx/karabiner/document.html.en , but you don't need to memorize this way now.)
3. Click the tab "Misc&Uninstall" on the right side.
Then click "Open private.xml" on the middle of this page. 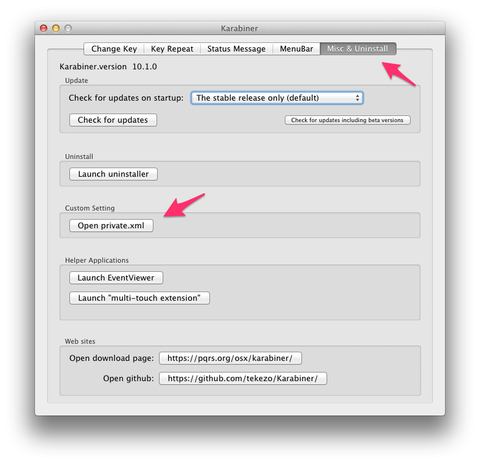 Then "Karabiner" folder will be opened and you can see "private.xml" file. in th folder.
(If you don't have file extensions displayed, you will see the file name "privete".
4. Delete this "private.xml" file.
(※ If you're using Karabiner and private setting already, don't delete this file and read #2 below.)

5. Then, download this file here and extract it.
↓
POCHI 7.9_beta code file
[About Updating]
I sometimes add new function and update this tool.
If you update POCHI, you only have to do like the way in 3.~6. and Reload XML.
Very simple.

6. New folder will be opend; name is "POCHI7".
Move "pochi" folder and "private.xml" file to the "Karabiner" folder that you have opened already.
7. Then, Keyboard setting and select "shortcut" tab.
(If you don't know where it is, just push Option + F6.)
And confirm that the shortcut key is set like this picure below.
The second one has to be  like this.
[✓]      Select the previous input source         ⌘Space (Command+Space)
[✓]      Select next source in Input menu     ⌥⌘Space (Option+Command+Space) 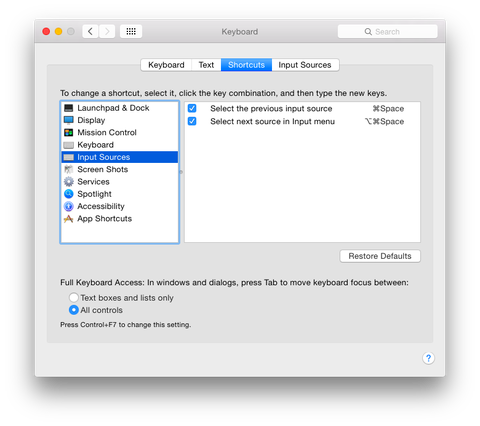 If it is not, please click "Restore Defaults" butten, and check the check boxes.
From El Capitan, Mac's default setting of Selecting Input Source has been changed to ⌃Space(Control + Space) and ⌥⌃Space(Option + Control + Space).
But Karabiner don't work on the setting.
You have to change them like the picture above. And you have to notice that what the Spotlight's shortcut is.
From Spotlight's shortcut default setting is also ⌃Space(Control + Space) and ⌥⌃Space(Option + Control + Space).
You have to change them not to overlap with input source shortcuts.
8. Next, check the "Input Source" Tab.
If there are any input source that you don't need, you should be better to delete it.

9. Then, let's return to the Karabiner.
Select the tab "Change Key" on the left side. 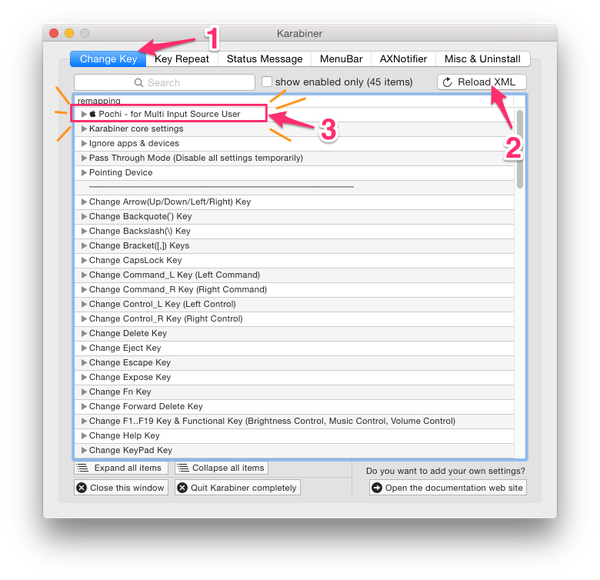 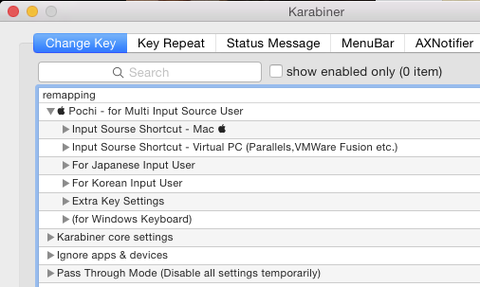 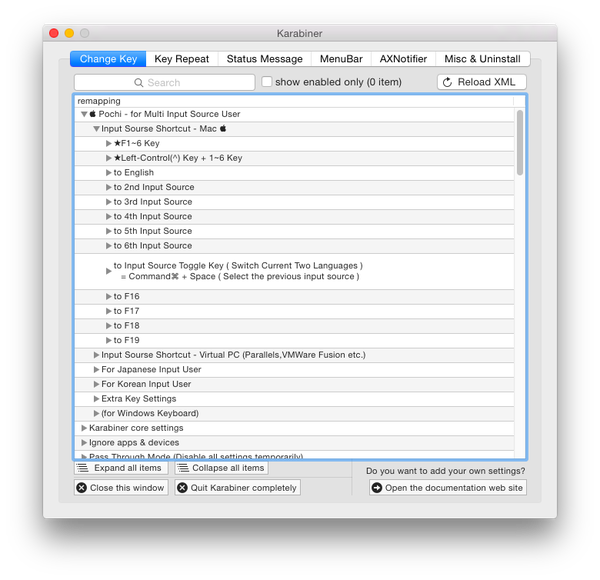 11. Then, you know the number of the input source which you want to use.
So at first, check the TEST check box.
And push 1 key~7 key and confirm the numbers for each language which you want to use.
You have to check the each number cherk box of shortcut setting in POCHI for each language.
After you get the number of the language, don't forget to uncheck TEST check box.

(※ If you use Japanese of Korean, there are original settings in "to Japaese input" or "to Korean Input". You'd better to set the shortcut there.)

You can see the order of the Input sources to push the language icon which is on the upper-right corner in the Mac screen like below. 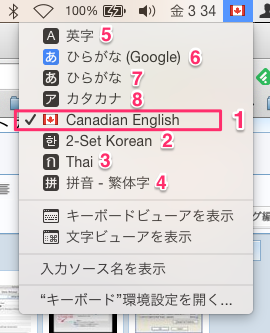 English is always 1st input source, and 2nd, 3rd one continues below.

(You can set the shortcut for only 6 input source. If you have more than 7 input sources, you have to delete some, or change the order of the input sources in System Preference. ⇨ notice #1 )


12. Then, Open the 1st(English)~6th input sources and check the shortcut that you want.

For example,  "Right-Command(⌘) Key" in "to 2nd input source" means "Push Right Command Key, and it turns to the second language."

There are 45 shortcuts.         (on windows extra keybord)
You can set input sources to each these 45 shortcuts keys. (maximam 7 input sources)
When you check the box you want, the setting will work right now on.
You can set one input source to many shortscut keys, but you can use only one action by one shortcut key(※Upper one takes the priority ).  So please check only one input sourch for each shortcuts.
(If you check more than two language for one shortcut, the upper one will work only.)
And you can use only 7 input sources. If you have more than 8 input sources, I recommend you to delete some languages like as KOTOERI, or change the sorting order of the languages in Language & Region in Synstem Preferences.

I think simple and useful shortcut key is  "Right-Command(⌘) Key"
You can use this key like KANA Key on the Japanese Keyboard.
If you add one more language, "Right-Option", or "Left-Option" key will be fine.
If you want to switch them faster, I recommend you to use "Left control(^) + i " or "Left control(^) + J, K, L". Because you can use these shortcut keys in home position.
"F key & J key (Press both keys at the same time) " will also be easy to push.
And I also strongly recommend you to change Caps Lock and Control by Mac OS setting.
(You can change them in System Preference > Keyboard > Keybord tab > Modefier Keys butten.)
I use "Left control(^) +  i " to change to Korean. It's possible to push in home position, very confortablly.

To confirm the shortcut keys which you checked at once, check the box of "show enabled only" on the right side of "Search" textbox. You can see all the shortcut setting that you are using in Karabiner now.


・to F16
・to F17
・to F18
・to F19
These are not shortcut for input sources, for the Function keys that you can use on IME settings or service shortcut settings on Mac.
I use [SPACE + Kana Key] to F18 for convert to KATAKANA.
Japanese information is here.
日本語: http://seoul-life.blog.jp/archives/41133567.html

▶Input Sourse Shortcut - Virtual PC(Parallels,VMWare Fusion etc.) New!
And next, this is the new virsion that I made this time, the shortcut for virtual PC.
You have to set the language shortcut on Windows OS.

Open the "Regional and Language Option setting" in "Control Panel" and open the "Text Services and Input Languages". And you can set the each language key shortcut setting in "Advanced Key Setting". 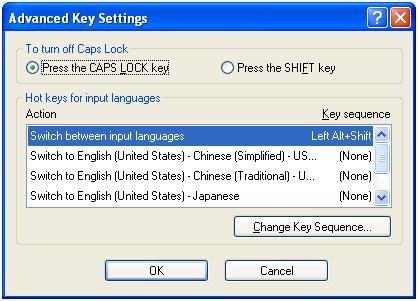 Then, push Change Key Sequence and set each language
"Left Alt+Shift + 1~6 numbers." that you want to use.
You'd better to use same numbers as on Mac !

Then you can set shortcut keys for 1~6 Languages on POCHI like as on Mac.
If you don't use English input Language now, I recommend you to install it. It will be more comfortable to change language.

▶For Korean Input User
Thank you to study Korean. (I'm also Korean teacher.)
This is the original settings for Korean input user.
You can change to Korean input faster than "to ◯th input source".
You'd be better to set shortcut here if you use Korean.
More information is on this blog.
한국어: http://blog.naver.com/minority25/220462255833

Using Control + T, R, you can easily switch applications with your hands on the home potision. It may be confortable.

If you have any quetsions or request about POCHI, feel free to send me masssage any time.
Thank you.

Then copy these texts.
and paste this texts next to
And move "Pochi" folder only to "Karabiner" folder.

Then, click Reload XML, and you can use both original settings.
If there are only 3 lines in "private.xml", just delete the file and go to 6.
#3. If you use more than 3 input sources,  you can't use toggle key on Mac.
So you will be better to set shortcut by Pochi.
#4. When you inport new language, it may not work at the firts time.
Please press [command+space ] several times.
And then Pochi will work well to change the source.


If you rewrite the code, you can also add new input source or more shortcut keys.
And if you have any question or request about POCHi, you can ask me in comment, or Facebook, or Twitter.